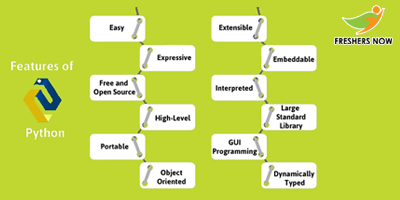 a) Easy to Read: As we all know that Python is a high-level language, and its code is similar to the English                 Language. By looking at the code any programmers can say for what the code has been written.

c) Easy to maintain: Python source code can be maintained easily by anyone.

Initially, Python is available for free of cost. So, you can download the software from https://www.python.org and can easily install. Secondly, it is open-source i.e. source code is available to the public. And you can also download the code, modify it and can also include into your project. So, it is also called as “FLOSS”. (Free Libre and Open Source Software)

Python has the support of Interactive mode, which allows interactive testing and debugging of code.

Python code can be run on different platforms. So, you no need to write again code there or change any modifications for different machines. So, this makes Python “Portable Language“.

Interpretation is nothing but converting machine language to Byte code. So, in the same way, Python source code is executed line by line. It is easier to debug your code. In C++ & Java, you first have to compile it. But in Python, there is no need for compilation.

If you need you can write some of your pythons in other languages like C++. So, it makes Python an extensible language. Nothing but it can be extended to other languages. (or) You can add low-level modules to Python Interpreter.

Python has a large library to use. So, you don’t need to write your own code for everything. Because there are different libraries like regular expressions, unit-testing, web browsers, threading, databases, image manipulation, etc.

Python supports GUI applications that can be used for system calls, libraries, windows systems, and others.

Python provides a better structure and support for large programs other than shell scripting.