In this tutorial, we will have an overview of various Hadoop Ecosystem Components. These ecosystem components are different services deployed by the various enterprise. We can integrate these to work with a variety of data. Each of the Hadoop Ecosystem Components is developed to deliver precise functions. Besides, each has its developer community and individual release cycle. 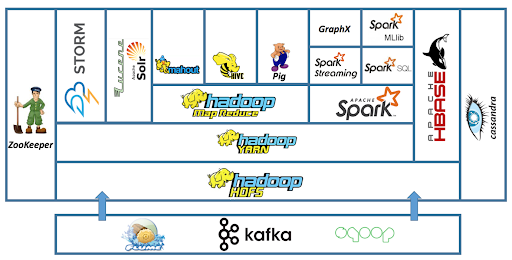 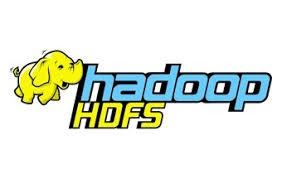 HDFS is the foundation of Hadoop and hence is a very important component of the Hadoop ecosystem. It is Java software that provides many features like scalability, high availability, fault tolerance, cost-effectiveness, etc. It also provides robust distributed data storage for Hadoop. We can deploy many other software frameworks over HDFS.

There are three major components of Hadoop HDFS are as follows:-

These are the nodes that store the actual data. HDFS stores the data in a distributed manner. It divides the input files of varied formats into blocks. The DataNodes stores each of these blocks. Following are the functions of DataNodes:-

NameNode is nothing but the master node. The NameNode is responsible for managing file system namespace, controlling the client’s access to files. Also, it executes tasks such as opening, closing, and naming files and directories. NameNode has two major files – FSImage and Edits log

Edits log – It contains modifications on FSImage. It records incremental changes like renaming the file, appending data to the file, etc.

Whenever the NameNode starts it applies Edits log to FSImage. And the new FSImage gets loaded on the NameNode.

If the NameNode has not restarted for months the size of Edits log increases. This, in turn, increases the downtime of the cluster on the restart of NameNode. In this case, Secondary NameNode comes into the picture. The Secondary NameNode applies edits log on FSImage at regular intervals. And it updates the new FSImage on primary NameNode.

MapReduce is the data processing component of Hadoop. It applies the computation on sets of data in parallel thereby improving the performance. MapReduce works in two phases –

MapReduce framework takes care of the failure. It recovers data from another node in an event where one node goes down. 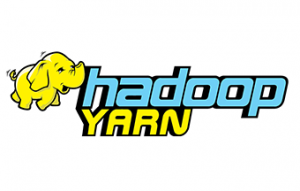 The yarn is short for Yet Another Resource Manager. It is like the operating system of Hadoop as it monitors and manages the resources. The yarn came into the picture with the launch of Hadoop 2.x to allow different workloads. It handles the workloads like stream processing, interactive processing, batch processing over a single platform. The yarn has two main components – Node Manager and Resource Manager.

It is Yarn’s per-node agent and takes care of the individual compute nodes in a Hadoop cluster. It monitors the resource usage like CPU, memory, etc. of the local node and intimates the same to Resource Manager.

It is responsible for tracking the resources in the cluster and scheduling tasks like map-reduce jobs.

Also, we have the Application Master and Scheduler in Yarn. Let us take a look at them. 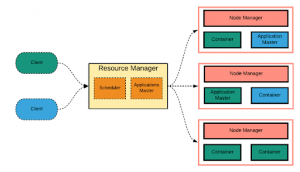 Application Master has two functions and they are:-

Following are the functions of Resource Scheduler:-

We have another concept called Container. It is nothing but a fraction of NodeManager capacity i.e. CPU, memory, disk, network, etc. 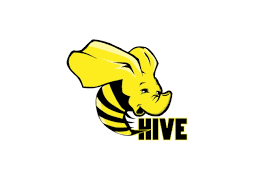 Hive is a data warehouse project built on the top of Apache Hadoop which provides data queries and analysis. It has got the language of its call HQL or Hive Query Language. HQL automatically translates the queries into the corresponding map-reduce job.

Main parts of the Hive are – Facebook designed Hive for people who are comfortable in SQL. It has two basic components – Hive Command-Line and JDBC, ODBC. Hive Command line is an interface for the execution of HQL commands. And JDBC, ODBC establishes the connection with data storage. Hive is highly scalable. It can handle both types of workloads i.e. batch processing and interactive processing. It supports native data types of SQL. Hive provides many pre-defined functions for analysis. But you can also define your custom functions called UDFs or user-defined functions. 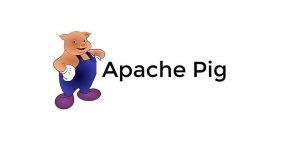 Pig is a SQL like a language used for querying and analyzing data stored in HDFS. Yahoo was the original creator of the Pig. It uses pig Latin language. It loads the data, applies a filter to it, and dumps the data in the required format. Pig also consists of JVM called Pig Runtime. Various features of Pig are as follows:-

a. How does Pig work?

HBase is a NoSQL database built on the top of HDFS. The various features of HBase are that it is an open-source, non-relational, distributed database. It imitates Google’s Bigtable and written in Java. It provides real-time read/write access to large datasets. Its various components are as follows:-

Region server is a process that handles read, writes, update, and delete requests from clients. It runs on every node in a Hadoop cluster that is HDFS DataNode.

HBase is a column-oriented database management system. It runs on top of HDFS. It suits for sparse data sets which are common in Big Data use cases. HBase supports writing an application in Apache Avro, REST, and Thrift. Apache HBase has low latency storage. Enterprises use this for real-time analysis.

The design of HBase is such that to contain many tables. Each of these tables must have a primary key. Access attempts to HBase tables use this primary key.

As an example lets us consider HBase table storing diagnostic log from the server. In this case, the typical log row will contain columns such as timestamps when the log gets written. And server from which the log originated.

Mahout provides a platform for creating machine learning applications that are scalable.

a. What is Machine Learning?

Machine learning algorithms allow us to create self-evolving machines without being explicitly programmed. It makes future decisions based on user behavior, past experiences, and data patterns.

b. What Mahout does? 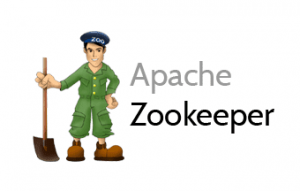 Zookeeper coordinates between various services in the Hadoop ecosystem. It saves the time required for synchronization, configuration maintenance, grouping, and naming. Following are the features of Zookeeper:-

Why do we need Zookeeper in Hadoop?

Another problem is the race condition. This occurs when the machine tries to perform two or more operations at a time. Zookeeper solves this problem by property of serialization.

It is a workflow scheduler system for managing Hadoop jobs. It supports Hadoop jobs for Map-Reduce, Pig, Hive, and Sqoop. Oozie combines multiple jobs into a single unit of work. It is scalable and can manage thousands of workflows in a Hadoop cluster. Oozie works by creating DAG i.e. Directed Acyclic Graph of the workflow. It is very much flexible as it can start, stop, suspend, and rerun failed jobs.

Oozie is an open-source web-application written in Java. Oozie is scalable and can execute thousands of workflows containing dozens of Hadoop jobs.

There are three basic types of Oozie jobs and they are as follows:-

How does Oozie work?

Oozie runs a service in the Hadoop cluster. The client submits the workflow to run, immediately or later.

There are two types of nodes in Oozie. They are action nodes and control flow-node.

Start, End, and Error Nodes fall under this category. 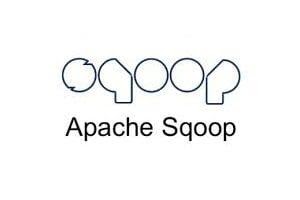 Let us see how Sqoop works

When we submit Sqoop command, at the back-end, it gets divided into several sub-tasks. These sub-tasks are nothing but map-tasks. Each map-task import a part of data to Hadoop. Hence all the map-task taken together imports the whole data.

Sqoop export also works similarly. The only thing is instead of importing, the map-task export the part of data from Hadoop to the destination database. 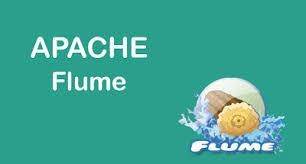 It is a service that helps to ingest structured and semi-structured data into HDFS. Flume works on the principle of distributed processing. It aids in collection, aggregation, and movement of a huge amount of data sets. Flume has three components source, sink, and channel.

Channel – It is a medium of temporary storage between the source of the data and persistent storage of HDFS.

Sink – This component collects the data from the channel and writes it permanently to the HDFS.

Ambari is another Hadoop ecosystem component. It is responsible for provisioning, managing, monitoring, and securing the Hadoop cluster. Following are the different features of Ambari:

Apache Drill is a schema-free SQL query engine. It works on the top of Hadoop, NoSQL and cloud storage. Its main purpose is large scale processing of data with low latency. It is a distributed query processing engine. We can query petabytes of data using Drill. It can scale to several thousands of nodes. It supports NoSQL databases like Azure BLOB storage, Google cloud storage, Amazon S3, HBase, MongoDB, and so on.

Let us look at some of the features of Drill:- 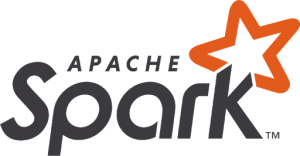 Apache Spark unifies all kinds of Big Data processing under one umbrella. It has built-in libraries for streaming, SQL, machine learning, and graph processing. Apache Spark is lightning fast. It gives good performance for both batch and stream processing. It does this with the help of DAG scheduler, query optimizer, and physical execution engine.

Spark offers 80 high-level operators which makes it easy to build parallel applications. Spark has various libraries like MLlib for machine learning, GraphX for graph processing, SQL and Data frames, and Spark Streaming. One can run Spark in standalone cluster mode on Hadoop, Mesos, or on Kubernetes. One can write Spark applications using SQL, R, Python, Scala, and Java. As such Scala in the native language of Spark. It was originally developed at the University of California, Berkley. Spark does in-memory calculations. This makes Spark faster than Hadoop map-reduce. 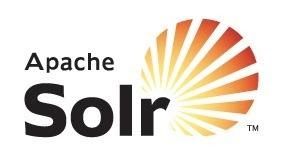 Various features of Solr are as follows –

So, this was all in the Hadoop Ecosystem. I hope you liked this article.