Want to learn how Hadoop initiates the failover from active NameNode to Standby NameNode?

In the Hadoop HDFS NameNode High Availability tutorial, we had seen how the High availability feature introduced in Hadoop 2 solves the NameNode SPOF (Single Point Of Failure ) problem. That tutorial describes the manual failover, where when the active node fails, then the standby node takes over the accountability of the active NameNode. But in manual failover, the system will not automatically trigger the failover from active NameNode to the standby NameNode.

In this tutorial, we will learn Hadoop Automatic Failover. We will first have a look at what failover is? And various types of failover. The key objective of this tutorial is to explain how HDFS achieves high availability through automatic failover. The tutorial explains the components, that is, ZooKeeper quorum and the ZKFailoverController deployed on Hadoop HDFS for achieving automatic failover.

Let us now first have a look at what is Failover.

What is Failover And Types of Failover

Failover submits to the procedure of transferring control to a redundant or standby system upon the failure of the previously active system.

There are two types of failover, that is, Graceful Failover and Automatic Failover.

In Automatic Failover, the system automatically initiates the failover from active NameNode to the Standby NameNode.

Let us now discuss each of these components in detail. 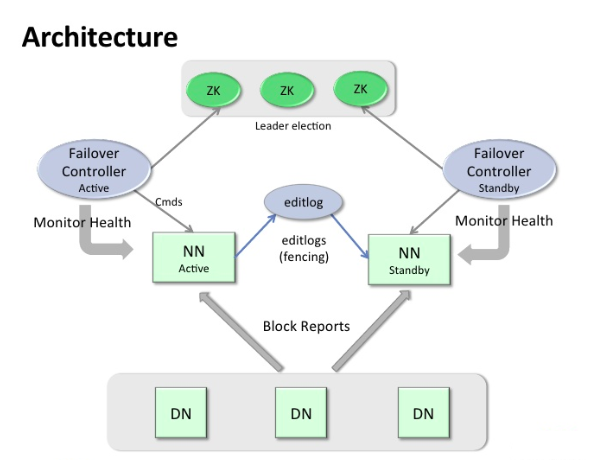 Apache ZooKeeper quorum is a highly available service for maintaining little amounts of coordination data. It notifies the clients about the changes in that data. It monitors clients for the failures.

The HDFS implementation of automatic failover relies on ZooKeeper for the following things:

Each NameNode machine in the Hadoop cluster maintains a persistent session in the ZooKeeper. If any of the machines crashes, then the ZooKeeper session maintained will get terminated—zooKeeper than reveal to all the other NameNodes to begin the failover process.

The ZKFC is the ZooKeeper client, which is also accountable for managing and monitoring the NameNode state. ZKFC runs on all machines on the Hadoop cluster, which is running NameNode.

It is responsible for:

• ZooKeeper-based election – When the native Namenode is healthy and ZKFC founds that no other NameNode acquires the lock “znode”, then it will try by itself to acquire the lock. If it gets successful in acquiring the lock, then ZKFC has won the election, and now it is accountable for running the failover to make it’s native NameNode active. The failover process run by the ZKFC is the same as the failover process run by the manual failover described in the NameNode High Availability tutorial.

This parameter specifies that the cluster is now set for automatic failover.

This parameter records the host-port pairs which are running the ZooKeeper service.

After adding the configuration keys, we have to reset required state in ZooKeeper using below command from one of the NameNode hosts:

It will generate a lock “znode” in the ZooKeeper inside which the automatic failover system stores its data.

Now, begin the cluster with start-dfs.sh that will automatically start a ZKFC daemon on any machine that runs a NameNode.

ZKFCs now automatically selects one of the NameNodes to become active.