Let us now first begin with an introduction to Hadoop Distributed Cache.

What is Distributed Cache in Hadoop? 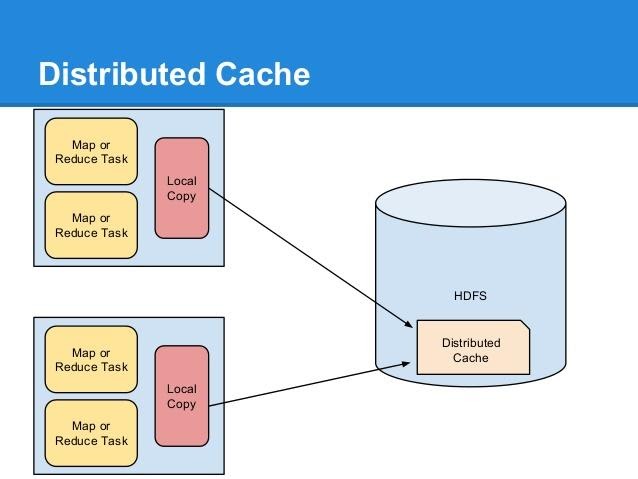 Side data is the read-only data needed by a job to perform processing on the primary datasets. The main challenge is to make this side data available to all the tasks running across the cluster efficiently.

Hadoop Distributed Cache is a mechanism provided by the Hadoop MapReduce Framework that offers a service for copying read-only files or archives or jar files to the worker nodes, before the execution of any tasks for the job on that node. Files get generally copied once per job to save the network bandwidth.

How does Hadoop Distributed Cache work?

When we submit any job, Hadoop copies the files specified by the options -files, -archives, and -libjars to the HDFS. Before a task run, the YARN NodeManager copies the files from HDFS to a local disk, that is, cache, so that the task can access the files.

The file, at this point, gets tagged as localized. From the task’s point of view, the files are there linked from the tasks working directory.

Previous to launching, the files specified via -libjars were added to the task’s classpath.

Also, the YARN NodeManager maintains a reference count for the number of tasks using each file in the cache.

Only when the count becomes 0, the file is eligible for deletion.

When nodes’ cache exceeds a specific size that is 10 GB by default, then to make room for new files, the files are deleted by using the least-recently-used policy.

We can change the size of the cache by setting the yarn.nodemanager.localizer.cache.target-size-Mb configuration property.

How to implement Hadoop DistributedCache?

For implementing the Distributed Cache, the applications specify the cached files via URLs in the form hdfs://in the Job.

The Hadoop Distributed Cache presumes that the files specified through the URLs are present on the File System at the path specified, and every node in the cluster has access permission to that file.

So for implementing the Hadoop Distributed Cache, the application needs to make sure that:

• files should be specified via URL only ( hdfs://)

• files specified should be available.

The MapReduce framework will then copy the cache files on all the slave nodes before the execution of any tasks for the job on those nodes.

The process for implementing Hadoop Distributed Cache is as follows:

2. Secondly, set up the application’s JobConf.

3. Use the cached files in the Mapper/Reducer.

Distributed Cache files are of two types that are private or public:

1. Distributes Complex data: The Hadoop Distributed Cache can deliver complex data like jars and archives. The archive files such as zip, tgz, tar.gz files are un-archived at the worker nodes.

2. Track Modification Timestamp: The Hadoop Distributed Cache tracks the modification timestamp of each cache file so that though the job is executing, no application or external factor should modify the cache file.

3. Consistent: Using the hashing algorithm, the cache engine always determines on which node a particular key-value pair resides. Therefore, the cache cluster is always in a single state, which makes it consistent.

4. No Single Point of Failure: It runs as an independent unit across many nodes in the cluster. So, failure in any one DataNode doesn’t fail the entire cache.

• Very slow – To inspect the type of information at runtime, it uses the Reflection technique, which is very slow as compared to the Pre-compiled code.

• Very Bulky – Serialisation is very bulky as it stores multiple data like class name, assembly, cluster details, and reference to other instances in member variables.

We can say that Distributed Cache is the facility provided by the MapReduce Framework, which distributes the files needed by the map/reduce jobs during task execution across the worker nodes. This decreases the latency. The article had explained how Distributed Cache works. We had also seen how we could implement a Distributed Cache in our MapReduce program. The Distribute Cache does not have Single Point of Failure, and it maintains data consistency as well.