In this HBase tutorial of Data Locality and HBase compaction with Hadoop, we will study the whole concept of Minor and Major Compaction in HBase, a process by which HBase cleans itself in detail. Therefore, we will see Data Locality with Hadoop Compaction because data locality is a solution to data not being available to Mapper.

So, let us begin HBase Compaction and Data Locality in Hadoop. 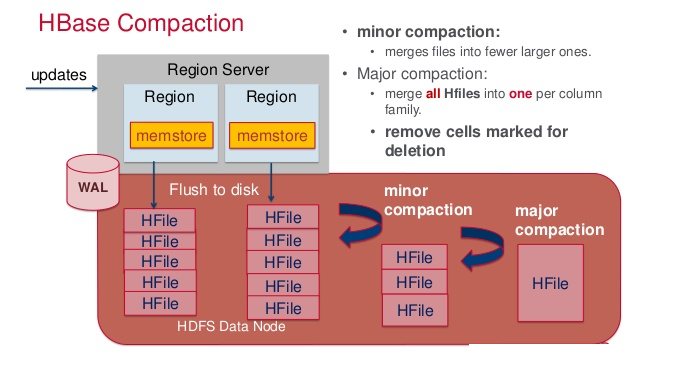 What is HBase Compaction?

As we know, for reading performance, HBase is an optimized distributed data store. Nevertheless, this optimal reading performance needs one file per column family. Although, during the heavy writes, it is not always possible to have one file per column family. Hence, to reduce the maximum number of disk seeks needed to read, HBase tries to combine all HFiles into a large single HFile. So, this process is what we call Compaction.

Do you know about HBase Architecture

The procedure of combining the configurable number of smaller HFiles into one large HFile is what we call Minor compaction. Though, it is quite important since, reading particular rows needs many disk reads and may reduce overall performance, without it.

Here are the several processes which involve in HBase Minor Compaction, are:

2. Also, Hfile stores the deleted file along with it. 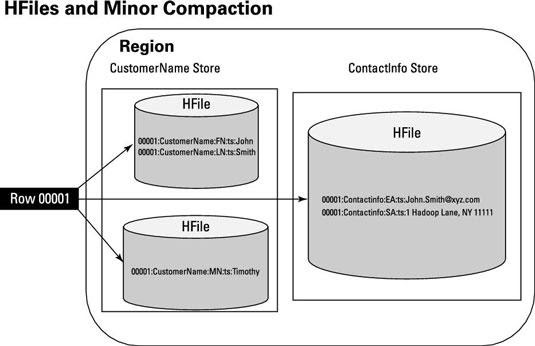 Whereas, a process of combining the StoreFiles of regions into a single StoreFile, is what we call HBase Major Compaction. Also, it deletes remove and expired versions. As a process, it merges all StoreFiles into single StoreFile and also runs every 24 hours. However, the region will split into new regions after compaction, if the new larger StoreFile is greater than a certain size (defined by the property).

Well, the HBase Major Compaction in HBase is the other way to go around:

1. Data present per column family in one region is accumulated to 1 Hfile.

2. All deleted files or expired cells are deleted permanently, during this process.

6. The other name of the major compaction process is the Write amplification Process.

7. And it is must schedule this process at a minimum bandwidth of network I/O. 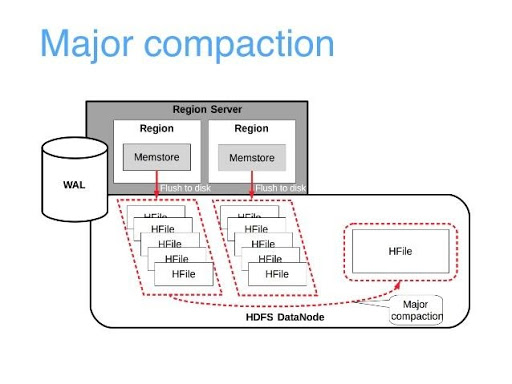 a. Short Description of HBase Compaction:

Now, to enhance the performance and stability of the HBase cluster, we can use some hidden HBase compaction configuration like below.

Generally, HBase users ask to possess full management of major compaction events hence the method to do that is by setting HBase.hregion.majorcompaction to 0, disable periodic automatic major compactions in HBase.

However, it does not offer 100% management of major compactions, yet, by HBase automatically, minor compactions can be promoted to major ones, sometimes, although, we’ve got another configuration choice, luckily, that will help during this case.

Control compaction process in HBase is another option:

Additionally, we can use off-peak configuration settings, if our deployment has off-peak hours.

Below are HBase Compaction Configuration options must set, to enable off-peak compaction:

The compaction file ratio for off-peak 5.0 (by default) or peak hours is 1.2.

Both can be changed:

As far high the file ratio value will be, the more will be the aggressive (frequent) compaction. So, for the majority of deployments, default values are fine. 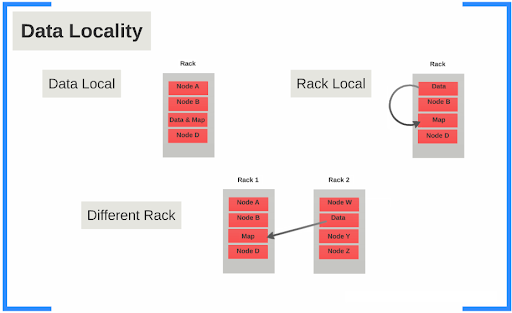 As we know, in Hadoop, Datasets are stored in HDFS. Mainly it is divided into blocks as well as stored among the data nodes in a Hadoop cluster. However, the individual Mappers will process the blocks (input splits), while a MapReduce job is executed against the dataset. However, data has to copy over the network from the data node that has data to the data node that is executing the Mapper task, when data is not available for Mapper in the same node. Consequently, it is what we call data Locality in Hadoop.

In Hadoop, there are three categories of Data Locality, such as:

Data local data locality is when data is located on the same node as the mapper working on the data. In this case, the vicinity of data is very near to computation. Mostly, it is a highly preferable option.

However, because of resource constraints, it is always not possible to execute the Mapper on the same node. Hence at that time, the Mapper executes on another node within the same rack as the node that has data. Hence, this is what we call intra-rack data locality.

Anyway, there is a case when we are not able to achieve intra-rack locality as well as data locality because of resource constraints. Hence, at that time we need to execute the mapper on nodes on different racks, and also then the data copy from the node that has data to the node executing mapper between racks. Hence, this is what we call inter-rack data locality. Although, this option is less preferable.

Hence, this was all in HBase Compaction and Data Locality in Hadoop. I hope you like our explanation.