C++ Files and Streams: In the C++ files and streams the operations are performed by using streams too. By using the file handling we can store our data in the secondary storage device. The operations on files can be done by using three classes. They are as follows: 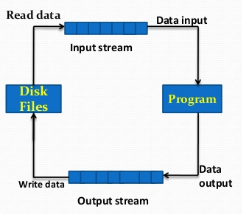 For achieving file handling in C++, we should follow these steps

Functions used in the File Handling

There are different modes in which you can open a file:

The default value for fstream mode parameter is in | out. It means that the file is opened for reading and writing when you use fstream class.

The istream allows object assignment. The predefined object cin is an object of this class and thus may be reassigned at run time to a different istream object.

You can extract characters from the stream when you open it for reading by using get( ) member functions. There are two possibilities to get unformatted input by using get( ) function.

getline( ) member function extracts a line into an array of characters pointed by str until n-1 characters are not extracted or delim character is not met.

ignore member function extracts characters from the file and ignores them until n characters are not extracted, delim or end of file (EOF).

If EOF is reached, the eofbit flag is set.

It returns the next characters in the stream but does not extract it.

There is a possibility to set the position of the next extracted value from the stream. It is done by using seekg functions.

In the same time, you can get the current position in the file input stream with tellg function.