What is Hadoop Streaming? Study How Streaming Works

Is it possible to write MapReduce jobs in languages other than Java?

Hadoop streaming is the utility that allows us to create or run MapReduce scripts in any language either, java or non-java, as mapper/reducer. 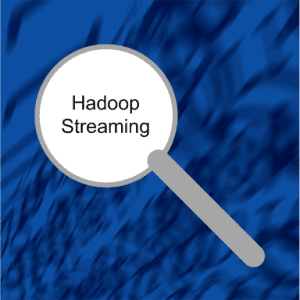 Hadoop Streaming is the utility that permits us to create and run MapReduce jobs with any script or executable as the mapper or the reducer. It uses Unix streams as the interface between the Hadoop and our MapReduce program so that we can use any language which can read standard input and write to standard output to write for writing our MapReduce program.

Hadoop Streaming supports the execution of Java, as well as non-Java, programmed MapReduce jobs execution over the Hadoop cluster. It supports the Python, Perl, R, PHP, and C++ programming languages.

The syntax for Hadoop Streaming

You can use the below syntax to run MapReduce code written in a language other than JAVA to process data using the Hadoop MapReduce framework.

• The mapper and the reducer (in the above example) are the scripts that read the input line-by-line from stdin and emit the output to stdout.

• The utility creates a Map/Reduce job and submits the job to an appropriate cluster and monitor the job progress until its completion.

• When a script is specified for mappers, then each mapper task launches the script as a separate process when the mapper is initialized.

• When reducer script is specified, then each reducer task launches the script as a separate process, and then the reducer is initialized.

Let us now discuss some of the streaming command options.

The general command line syntax is:

The Streaming command options are:

It specifies the input location for the mapper.

This streaming command option specifies the output location for reducer.

It specifies the Mapper executable. If it is not specified then IdentityMapper is used as the default.

It specifies the Reducer executable. If it is not specified then IdentityReducer is used as the default.

The class you supply should return key/value pairs of Text class. If not specified then TextInputFormat is used as the default.

The class you supply should take key/value pairs of Text class. If not specified then TextOutputformat is used as the default.

It specifies the number of reducers.

It makes the mapper, reducer, or combiner executable available locally on the compute nodes.

It is the script that is called when the map task fails.

It is the script to call when a reduce task fails.

This option specifies the class that determines which reducer a key is sent to.

Thus these are some Hadoop streaming command options.

We hope after reading this tutorial, you clearly understand Hadoop Streaming. Mostly Hadoop Streaming allows us to write Map/reduce jobs in any languages (such as Python, Perl, Ruby, C++, etc) and run as mapper/reducer. Thus it permits a person who is not having any knowledge of Java to write MapReduce job in the language of its own choice.

The tutorial has also described the basic communication protocol between the MapReduce Framework and the Streaming mapper/reducer. The tutorial also explained some of the Hadoop streaming command options.